The next Saturday evening OPD clinic at Guwahati Press Club will be conducted by a well-known kidney ailment expert from Manipal Hospital Bangalore. Dr Sankaran Sundar, senior consultant Nephrologist and head of international kidney transplantation program of the hospital will be available for free consultations to member-journalists of the press club along with their dependents. The camp, organized under the series of 'Evening with a Doctor' programs, will begin at 2 pm on 13 May 2017 and continue till 4 pm.

Earlier on 6 May senior gynecologist from Apollo Chennai Hospital, Dr A Vinutha graced the camp exclusively organized for the women journalists along with the spouses (and daughters) of Guwahati Press Club members at the club premises. Prior to it, Dr Vinutha also delivered a talk on various women related ailments and their preventions at the club auditorium.

It may be mentioned that eastern India’s one of the pioneer press clubs launched the unique healthcare initiative last year. Assam’s Dispur Hospitals initially supported the endeavour with raising a doctor’s chamber at the club premises in August 2016. The city based hospital under the leaderships of Dr Jayanta Bardoloi also conducted the first episode of evening OPD clinics.

5 Aug 2011 - 10:46pm | editor
The United Liberation Front of Asom demands more autonomy and constitutional safeguard for the indigenous people in Assam. In its 12-point of charter of demands submitted before Union home... 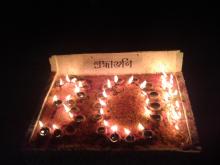 30 Oct 2016 - 9:35pm | AT News
In memory of the victims of the October 30 2008 serial blast, Nazira,  a 'Swardhanjali' programme was organsied by Rongman Cultural group as a Anti Terrorist Day in front of Nazira Natiya Mandir...