The Supreme Court’s verdict on Wednesday against the Assam Parliamentary Secretaries (Appointment, Salaries, Allowances and Miscellaneous Provisions) Act, 2004  will have bearing impact in the north eastern states of Nagaland and Arunachal Pradesh.

Both the north eastern states have 26 parliamentary secretaries in the 60member legislative assemblies.

Same it was is in Arunachal Pradesh where Chief Minister Pema Khandu recruited parliamentary secretaries to help them enjoy the rank of a minister of state.

Notably, in a significant judgment the Supreme Court on Wednesdaycalled unconstitutional a law in Assam that paved the way for appointment of parliamentary secretaries in the rank of minister of state to pacify the disgruntled ruling party legislators  enacted in 2004.

A division bench of the country’s top court comprising Justice J Chelameswar, Justice RK Agrawal and Justice AM Sapre said that the legislation was unwanted in Assam to create these posts of parliamentary secretaries.

The court said, “Article 194 does not expressly authorise the state legislature to create offices such as the one in question.”

The Act allowed the government to accord the status of a minister of state to the parliamentary secretaries. Hence the Court struck down the Assam Parliamentary Secretaries (Appointment, Salaries, Allowances and Miscellaneous Provisions) Act, 2004 where the then Chief Minister Tarun Gogoi rehabilitated many loyalist legislatures.

22 Oct 2014 - 9:18pm | AT News
Come February 19. The state will host the trade and industry fair. The venue is Jorhat. Jointly organized by the Assam government and the Federation of Industry and Commerce of North Eastern Region,... 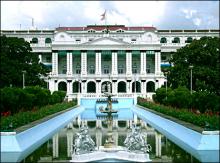 24 Jul 2008 - 1:32am | Nava Thakuria
Loosing the important ballot race in the constituent assembly for the 'head of the state' and his subordinate, the rebellion communists of Nepal has decided not to form the government. The Maoist...