The Bodoland Territorial Council(BTC )  on Tuesday issued appointment letter to his younger brother and sister of Lafikul Ahmed who was killed by unidentified miscreants a couple of weeks back in Kokrajhar.

BTAD chief Hagrama Mohilary handed the letters in presence of ABMSU leaders on Tuesday apart from Rs 2 lakh to the bereaved family.

Ajmal took stock about prevailing situation in the region during meeting with Mohilary as well Deputy Commissioner and SP of Kokrajhar.

Ajmal said that CBI must be conducted to arrest culprits and punish who were involved with Lafikul murder case.He said that peoples in the region are face security lapsed. He has demanded stern measures against killing of Lafikul. He said that assasination of Lafikul was condemned and unfortunate in the state. 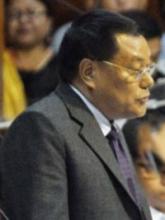 16 Oct 2015 - 8:06pm | AT News Itanagar
There is no impending threat to the Nabam Tuki government in Arunachal Pradesh if Bosiram Siram is to be believed. Attending a public meeting at Yagrung village on Friday, the chief minister’s...

17 Jul 2008 - 3:59pm | editor
The Congress MPs from the north eastern region will vote for the Indo-US civilian nuclear deal on the June 22 floor test.Speaking to reporters on Wednesday in Shillong, chairman of North East...