The weekly evening OPD clinic at Guwahati Press Club on Saturday (12 August 2017) was conducted by the city based physiotherapist Dr Kangkan Talukdar. Organized with supports from Indian Association of Physiotherapists and All Assam Physiotherapy Association, the camp witnessed the participation of around 25 media persons. They were offered free consultations in the camp, where health workers Anamika Sahu and Rohit Sharma extended assistances. The participants also got their blood pressure checked in the camp. 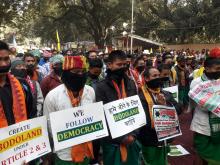 6 Oct 2015 - 7:41pm | Hantigiri Narzary
The Bodoland Students Union (BSU) has appealed to the Northeast people to vote for Proneeta Swargiary who is a finalist in the ongoing DID Season 5, dancing competition in the ZEE TV. Addressing...