The forum also wishes early recovery of another city based television scribe, who was admitted to GMCH after facing an attack from miscreants last night. Biman Kalita of News Live, who was stabbed last night at Dhirenpara locality, is still in the hospital.

Saddened by the untimely demise of Rima, the forum also mentions that two more scribes are presently undergoing treatment in separate hospitals of the city. Gautam Hazarika of DY365 and Kushal Lahan of Amar Asom were admitted to hospitals on 15 August following after a massive brain stroke and road accident respectively. 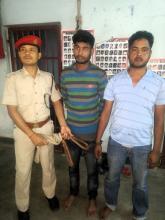 21 Mar 2017 - 9:25pm | AT Staff Reporter
In a very drama like action Udalguri police successfully apprehended two abductors and rescued two persons who had been abducted yesterday within twenty four hours.According to information,one Arab...

11 Oct 2010 - 2:23pm | editor
A forum comprising all the electronic media persons of Guwahati was formed at the Guwahati Press Club on Sunday (10.10.10). Formed with an aim to protect the rights of media persons and encourage the...