Rail services are disrupted since 5am morning along the northeast frontier railway due to rail blockade for 12 hours seeking early solution of Bodoland issue and provide political rights to the Bodos who are out of proposed Bodoland.

Several long distance express train and passenger trains are stranded at different stations dua to 12 hours Railway trak blockade at Kokrajhar and Sonitpur today by ABSU, PJACBM, NDFBP in support of demanding separate Bodoland statehood, provide political right and protection to the Bodos who are residing out of proposed Bodoland.

In Kokrajhar station, nearly lakh peoples from different districts of lower Assam gathered with banner, placards and shouted slogans seeking early solve of Bodoland issue through political dialogue. The agitators seated on the rail track since 5 am and to be continued till 5 pm.

Several express, passenger trains have been reportedly stranded at various stations due to the blockade.

16 Jan 2009 - 3:16pm | editor
The Supreme Court on Thursday has asked the government to submit a status report on the Bangladeshi immigration and stressed national identity cards for all citizens of the country to resolve the...

4 Apr 2012 - 4:48am | editor
Respected Assamese Residents of Mumbai. You are cordially invited to the cultural programme organized on the occasion of Rongali Bihu 2012 at Mumbai and at Navi Mumbai.The details of the programme as... 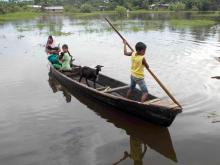 No let-up in monsoon misery

25 Jul 2016 - 12:52pm | AT News
There seems to be no respite from the ravaging flood waters in Assam on Monday. A steep rise in the water levels of the Brahmaputra and its tributaries have compounded the scene where 15 districts...