NEW DELHI: Nearly 200 people from BTAD areas hit the streets in New Delhi on Wednesday demanding seperate Bodoland statehood saying that it is only the way to help these huge tribal group develop.

Organized jointly by ABSU, NDFB-P and a joint action committee on statehood, the rally started from Rajghat and ended at the Jantar Mantar crossing the Sansad Marg where the participants shouted slogans to divide Assam, help the Bodos develop.

"We have reached the capital to reiterate the demand since we have noticed that the government both in Delhi and Dispur is not serious. Before the last general election, they promised it. But now they have been going slow," said Ratul Gayari.

They signed with their blood drops a memorandum to the prime minister demanding measures to solve the vexed issue since only one and a half year remains for the next general election.

The three Boro organizations staged dharna in the Ramlila Ground on Tuesday where the leaders sticked to the separate statehood demand.

18 Jun 2007 - 3:45am | editor
From Our Correspondent GUWAHATI: Development in any form must ensure the well being of the people of all section. But what the Government does these days only to safeguard the interest of the multi...

12 Jul 2013 - 10:12pm | AT News
The Assam-Meghalaya joint district level border meeting in Dhubri resolved to end tension. Both sides urged the student bodies to end the economic blockade. The joint meeting took place at the... 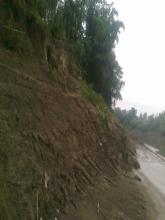