SILCHAR: The on going process to update NRC has raised doubts over the citizenship of a senior Congress leader who needs to undergo reverification. He is non other than Siddeque Ahmed, the former minister in the erstwhile Tarun Gogoi government whose name is not available in the NRC, 1951.

Ahmed, who was elected thrice from Karmganj claimed to have been a native of Dhalopar gaon in Patherkandi police station who is facing reverification on Thursday a week after he was served a notice.  According to sources, Abdul Rakib, whom he claimed to be his father is available in the 1951NRC. On the other hand, his brothers have not received any notification to be reverified. 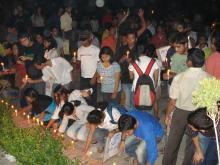 2 Nov 2008 - 3:15pm | editor
The students of Delhi woke up today against the serial blasts in Assam. A large number of students took out a protest rally in Delhi University, North Campus and traversed the whole Delhi Univesity...

8 Dec 2013 - 5:45pm | Nababuddin Ahmed
Nafisa Sadiq has made the state proud by winning the maiden silver medal in the recently concluded 19th Asian Jr. Rowing Championship held at Samarkand, Uzbekistan in October followed by a gold...

5 Jul 2010 - 10:59pm | editor
The National Investigation Agency probing the terror funding case in Dima Hasao gets remand of DHD-J military chief Niranjan Hojai for 7 days after he was produced before a special court in Guwahati...