GUWAHATI: Some stunning revelations are believed to have surfaced on the Jugdal case when police arrested two officers eight years after unidentified miscreants hacked to death 6 members of a family in the outskirt of Guwahati. The CID team probing the case has been interrogating the then Sonapur police station officer in charge Pranab Kumar Deka and investigation officer Abdul Matif Choudhury who were arrested on Wednesday.

Sources told Assam Times that the probe refused to progress because of political influence in Dispur in the erstwhile Tarun Gogoi regime. As the probe into the sensation murder case gathers steam, two political leaders are likely to land in trouble.

The police officer duo have been arrested for trying to destroy evidence to save the perpetrators of the gruesome murder of Harakanta Doloi along with five of his family members in 2009. Trouble might brew for a section of the forensic laboratory officials for trying to cover up the misdeeds in the report. 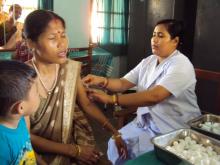 10 Oct 2011 - 3:32am | mridulburagohain
Sivasagar district encephalities vaccination (SA 14-14-2) campaign started on Sunday for first time in the Country. 15 to 65 years old people will be included in the campaign. The programme began...

14 Nov 2014 - 11:29am | AT News
Sotea MLA Padma Hazarika has moved Dispur seeking special security guards in view of stepped up activities of NDFB-S militants in his constituency.Hazarika, who has been representing Sotea in...

JFA pursues for wage board benefits to media employees

10 May 2016 - 6:50pm | AT News
Journalists’ Forum Assam (JFA), while maintaining its demand for all due benefits to media employees including the journalists in accordance with the guidelines of Majithia wage board, urged the...