GUWAHATI: A fresh agitation id hovering over Assam as the NDA government is gearing up ensure passage of the Citizenship (Amendment) Bill in Parliament which is holding its winter session from Friday.

The All Assam Students Union leaders has vowed to fight yhr move saying it would allow it to happen. "We are dead opposed to the move. This bill must not be allowed to proceed or we will take resort to a massive agitation," said a AASU central leader over telephone.

In statement, KMSS has warned state BJP unit not to proceed with this deal to clear the Bill for citizenship status to the Hindu illegal settlers. "We have warned the BJP governments in Delhi and Dispur and the party of dire consequences if they keep trying to clear the Bill in Parliament. We won't remain idle," said the peasant body.

Other organizations also are opposing the move which would make the Assam Accord an irrevalent set of papers.

Assam Congress leader Debobrata Saikia in a letter shot off to chief minister Sarbansnda Sonowal has suggested an all party meeting to the Centre to discuss the entire issue.

Assam BJP unit steps up the move to clear the passage of the Bill after a delegation of the party submitted a memorandum before the chief minister to ensure safety of the Hindu immigrants at the fag end of the NRC works.

The NDA government at the Centre moved in Parliament thr Bill two years back triggering statewide protest. A parliamentary panel set up to study the Bill could not visit the state in the face of an escalating protest. 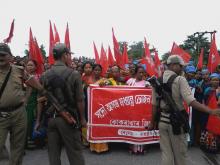 2 Sep 2016 - 2:58pm | AT Kokrajhar Bureau
Hundreds of bandh supporters blockade 31C National Highway at Serfanguri in Kokrajhar district along with rest of the state, on the 12-hours nationwide strike called by trade unions in protest... 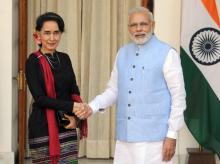 19 Oct 2016 - 4:02pm | AT News
India and Burma (Myanmar) agreed for close security coordination in border areas keeping in view the sensitivity of each other’s strategic interests. In a press statement after holding delegation...