GUWAHATI: The Old Boys Association of Sainik School Goalpara (OBA SSG) has taken up the beautification of six mile fly over by managing the traffic island garden at the fly over.

Two traffic island garden were inaugurated by Mr Pradyut Chaudhury who praised OBA SSG for taking the initiative. Ranjit Borthakur who is also the president of OBS SSG has said that OBA SSG has been taking up different social activities since its inception and the organisation is committed for working for the betterment of society . 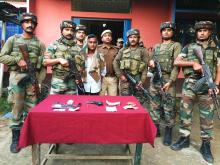 8 Mar 2018 - 6:14pm | Akshaya Pranab Kalita
NAMRUP: Police and army claimed to have captured a hardcore ULFA-I rebel during a combing operation in Sonari who was among those threatening a section of coal traders in Nimonagarh and Tiru.Acting... 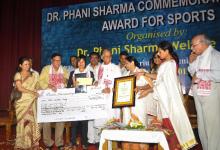 25 Aug 2012 - 6:39pm | editor
Dr. Phani Sharma Commemorative Talent Award for Sports for the to a promising sportsperson of the state. Year 2012 held on Auguast 23 at Anuradha Cineplex, Guwahati. This year’s award was...

26 Feb 2008 - 5:34am | editor
For Jeena Gogoi, it's a long spell of 21 years to get her husband back. Prabin is back since he was missing from atop Arunachal Pradesh while he was on duty. But the 10th Assam Regiment Subeder finds...
Follow @Assam Times