Kokrajhar: A six member team of the Central Bureau of Investigation(CBI) has started probing the murder of Lafikul Islam Ahmed in Kokrajhar four months after the sensational case struck the state. Led by CBI SP attached to special crime branch Upendra Kumar Agarwal, the CBI team based in Kolkata arrived in Kokrajhar on Thursday and visited at the spot at Titaguri Bazar and rushed at Salakati SBI branch office.

The CBI team which is camping at the Kokrajhar Circuit House and has been extracting inputs for the probe. The investigation agency has already questioned some eye witness  apart from interacting with the police officials. They interrogated the owner of the JK Trader Gautam Khundo and bullet injury survivor Shubangkhar Chakrabarty where Lafikul was shot dead by unidentified miscreants on August 1, 2017. The CBI team checked bank accounts belonging to Lafikul Islam at Salakati SBI branch and interacted with bank officials. 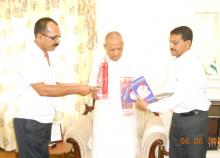 Governor of Assam to promote peasants&#39; revolt of Patharighat at national level

13 Jun 2012 - 3:22pm | Jayanta Kumar Das
Assam Governor Janaki Ballav Patnaik said that he would promote the “Peasant's Revolt” of Patharighat on January,1894 at the national level. He said this while receiving a book “...

21 Jul 2017 - 2:20pm | Dibya J Borthakur
A 29-year-old married woman was murdered at her residence at Uttar Petboha village under Raha P.S on Thursday night. Sharp weapon injury marks were found on the neck, breast, and stomach  of...