IMPHAL, Jan 20 (NENA): A few new species of migratory birds were found flocking at Loktak Lake during this year’s bird count, but the exact number of birds is yet to be known officially as of now.

A total of 250 volunteers were used during Saturday's bird count conducted at 50 different spots of the lake, jointly conducted by the Wild Life Wing, Manipur Forest Department and Indian Bird Conservation Network with the help of various organisations.

Officials said a few new feathered visitors were sighted this year. Bird count at the Manipur’s iconic lake is done during this time of winter every year.

A number of migratory birds and a variety of waterfowl arrive at Loktak Lake, a Ramsar site, from mainland Russia, Siberia and the Himalayan range in the months of November, December and January every year.

However, environmentalists and forest officials are alarmed by the sharp reduction in the number of these birds due to human disturbances in the last few years. 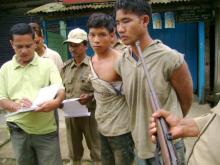 3 May 2008 - 1:16am | editor
Two Naga youth namey Nowang Konyak and Tazam Konyak have been arrested in connection with the illegal cutting of forest of the Abhayapur Reserve Forest by the Forest Officials of Namtula Beat Office...

10 Mar 2015 - 4:59pm | Hantigiri Narzary
Devotees from various parts of Kokrajhar and its adjoining districts like Dhubri,Bongaigaon and Chirang thronged the Shiva Mandir on the top of Diplai Hill on the occasion of Diplai Hill Holi puja...

13 Jul 2015 - 10:27am | AT News
A circle of top Congress leaders is contemplating to join BJP just ten month ahead of the assembly polls. Bu the ruling party is least bothered.Sources told Assam Times they have been in...