IMPHAL: The Impulse NGO Network (INGON) has launched a project engaging media to counter human trafficking in and between the borders of India, Bangladesh, Myanmar and Nepal. The Impulse Model Press Lab will train journalists from the neighbouring countries to improve media coverage on human trafficking and bring informed, impactful reports to the public.

The project, evolved out of recognition of the media's important role in driving information on the complex issue, aims to bridge the gap between journalistic training and sensitization to human trafficking. INGON will partner with international media in the process to implement the Impulse Model Press Lab, building upon its collaborative relationships with the BBC, Thompson Reuters Foundation, France 2 and CNN News 18 and Sikkim Express.

The Impulse Model Press Lab will run a one-year fellowship program for early-career journalists from India, Bangladesh, Nepal and Myanmar, who will receive training and mentorship to enhance their skills and understanding of human trafficking and become sensitized to the experiences of victims and survivors. The fellowship will focus on trends driving increasing rates of human trafficking across the porous border countries – an issue that mars region.

The project will also include a four-week fellowship for mid-career journalists from each country to conduct major in-depth reports on cross-border human trafficking in the neighbouring states.

An important feature of this initiative is that digital and social media will be harnessed to increase public understanding of the complex landscape of human trafficking, while training journalists to accurately and sensitively report on the issue, and to uphold the privacy and dignity of victims and survivors.

A cross functional team of core members drawn from various fields, including journalists, gender specialists, psychologists, legal experts, and country advisers to the Impulse NGO Network, will lead the three-year project. The team recently convened for the first consultation on the Impulse Model Press Lab in Kathmandu, Nepal on 11-12 January 2018.

Karma Paljor, Consulting Editor, CNN News18, and Core Committee Team Leader of the Impulse Model Press Lab, says that the project is an important step towards ensuring robust reporting of human trafficking. "The media is a powerful tool, but in the race to be first in reporting stories in-depth journalism has suffered. In human trafficking especially, only one aspect gets reported. It's only when a criminal network is uncovered or when victims are rescued that cameras and reporters descend on the scene. We want to get the basics back and see that all issues are given equal weightage. It's also important to sensitize the journalists and have specialists who understand the nature of what they are reporting on."

INGON aims to harness results from the Impulse Model Press Lab to bolster the accountability of governments' anti trafficking measures in the region, and collaborative efforts to prevent cross-border human trafficking.  An evaluation of the project will be conducted to assess the goals and outcomes at the end of its first year. The evaluation, involving all participants of the project activities, will be central to identifying key strengths and areas of improvement and deciding the future roadmap of the lab.

Flood of worries refuse to recede

27 Jun 2012 - 1:14am | editor
The overall flood situation turned grim on Tuesday with the water levels of the Brahmaputra and its tributaries rising further. The toll in this flood wave alone has gone up to 10. Incessant rains... 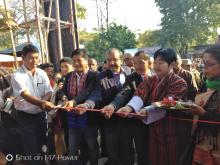