Kokrajhar: In a huge boost for BPF, at least 38 former NDFB rebels and former ABSU leader Prahalad Brahma joined in the regional in Kokrajhar on Saturday.

23 Sep 2015 - 10:10am | AT News
Assam observes the 567th birth anniversary of the saint Sankardev with much traditional fervor across the state on Wednesday. Series of seminars, cultural and religious programmes are lined up on the...

29 Aug 2012 - 2:55am | Jayanta Kumar Das
A five years old wild elephant has been found dead at a paddy field in Majuli Basti village under Dimakuchi Police Station in Udalguri district on August 28. According to veterinary sources it had... 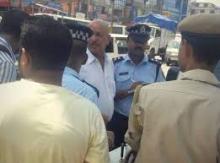 Hunt on for Hatigaon miscreants

22 Feb 2018 - 10:15am | AT News
GUWAHATI: Security forces are fanning in the nook and corner of Guwahati a day after miscreants shot dead a trader in the city. The Hatigaon police, probing the case, is believed to have been seeking...