Give us vote, we will give you smartphone

AGARTALA: A BJP poll promise triggers no less controversy in Tripura giving much ammunition for the ruling Left Front to attack the saffron party amid the electioneering heat and dust. If BJP is voted to power all youths in the north eastern state will receive smartphones. The poll promise comes out in the speech of party president Amit Shah who held three rallies in the state on Monday.

Later addressing a press conference Shah exuded confidence that BJP will be able to form the government in the state marking an end of the Left regime. UP Chief Minister Yogiraditya who arrived in the state to campaign for the party candidates offered puja to an ancient temple. Union finance minister Arun Jaitley released the party's poll manifesto promising all central assistance to help the state march steadily.

3 Apr 2014 - 5:09pm | AT News
A team of specialists is closely monitoring the condition of Mani Kumar Subba after the Tezpur independent candidate was rushed to the GNRC following a mild stroke on Thursday.The former Congress MP... 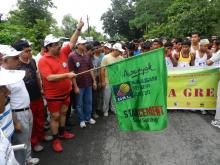 6 Jun 2012 - 12:26am | editor
It was a unique way to take pride in and take a vow to protect the rich bio-resources of Kaziranga National Park, a UNESCO World Heritage Site, on the occasion of World Environment Day.A section of...

19 Jul 2007 - 1:26am | editor
The 28th Assam Convention was held at the Hyatt Regency hotel in Boston, Massachusetts on Saturday, June 30 and Sunday, July 1 amidst much fun fare. For the first time ever in the history of Assam...