GUWAHATI: The Dibrugarh police probing the APSC scam on Tuesday arrested two more officers charging the duo with resorting to unfair means to ensure selection in the civil service examination.

They are expected to be produced before the special court on Wednesday morning seeking them in their demand.

Notably, Pinch is the husband of Nishamoni Deka whom police arrested and sent to the Guwahati Central Jail in the same APSC scam.

26 Jan 2014 - 1:45pm | AT News
Tension seems to have been escalating in Kokrajhar on Sunday following the recovery of a girl’s body a day after she went missing.Local residents spotted the body at a paddy field at Binachora on... 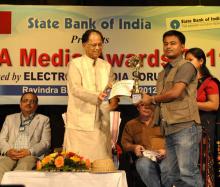