Assam Chief Minister Tarun Gogoi today denied media reports that there were no illegal Bangladeshi nationals staying in the State.

In a statement here today, Gogoi strongly denied having made a statement that there were no illegal migrants in Assam on the sidelines of the National Integration Council (NIC) meeting at New Delhi yesterday.

Gogoi said he had pointed out in the NIC meeting that the communities involved in the group clashes at Udalguri and Darrang districts were Indian citizens and that he had not come across any foreign national when he visited the affected areas, though certain political parties projected it as a fight against illegal migrants by indigenous people.

he Chief Minister even countered BJP president, Rajnath Singh at the NIC meeting when he raised the issue of unabated influx of illegal migrants in Assam, saying that if the situation of illegal migrants in Assam was so grave, why did not the previous Government at the Centre initiate effective measures. On the other hand, Gogoi dwelt at length on the slew of initiatives taken by his Government to check further infiltration such as border roads and fencing, flood lighting, riverine patrolling and to start the process of upgradation of the National Registrar of Citizens, 1951 for permanent solution of the foreigners' problem. He also said that it was during his tenure that the number of tribunals for detecting foreigners has increased.

Gogoi made it loud and clear that his Government was committed towards implementation of the Assam Accord in letter and spirit vis-à-vis in detecting illegal migrants and in safeguarding the rights of genuine Indian citizens as per Assam Accord.

He further made it clear that his Government would not allow either internal or external aggression to take place on the soil of the country and it was committed in protecting the country's territorial integrity. 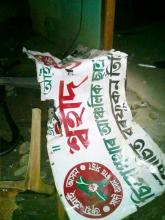 7 Mar 2017 - 11:43am | AT News
Dhemaji police have arrested nine youths charging them with vandalizing a local AASU office in Silapothar on Monday.Police picked them up from different places early in the morning. Operation is on... 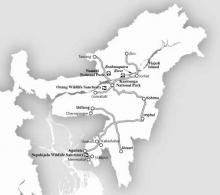 12 Jul 2008 - 10:40pm | editor
Critical to the progress towards prosperity in NER is its liberation from economic imprisonment. This would require a qualitative change in the relationship of the country with the neighbouring...

6 Jan 2012 - 3:19pm | Anup Biswas
The Jadikhe Naisho Hosom (JNH) vehemently condemned the killing of Donald Sengyung and urged upon the government to uproot the evil designs of all such miscreants and nab the culprits involved and...