DUDHNOI: All is not well with the Goalpara Science Academy. A couple of weeks after the premier junior college in the lower Assam district bought a bad name, it lands in a fresh trouble after the police arrested a teacher acting on the allegation of a rape attempt.

The police probing the case further has registered cases against headmaster and the director under the Prevention of Children from the Sexual Offences (POCSO) Act 2012.

According to allegations, yoga teacher Humayun Kabir brought the students to the campus on Sunday afternoon at Bapujinagar in the town. She a Calss X girl went to the toilet attached to the room the yoga teacher raped her.

Then she told it to her hostel warden who immediately informed it to the principal and director Khanindra Nath and Nazmul Hoque for needlful action. But the duo kept mum.

As the victim disclosed it to her parents, then the local residents moved the police station with the complaint. After recording the victim’s statement, the polic on Monday wee hours held Kabir.

Hours after it, the police arrested Nath and Haque for not taking up the case with police. A local court in Goalpara on Monday sent Kabir to seven days police custody and ordered two days police remand for the principal and director.

Many local organizations have demanded proper punishment for the guilty teacher along with the principal and director.

24 Nov 2014 - 2:39pm | AT News
Guwahati wears a fresh look. Roads and walls, flyovers and bus stops in this premier north eastern city are being painted afresh. Only a couple of days are left. Prime Minister Narendra Modi is...

2 Aug 2012 - 5:37pm | editor
An uneasy situation prevails in Nagaon on Thursday a day after a local trader was shot dead in Lanka. The incident took place in the midnight when victim Mukut Ali, who was halting for the night at a... 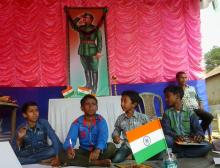 23 Jan 2015 - 5:32pm | Hamidul Gani
Along with rest of the state, the 118th birth anniversary of Netaji Subhas Chandra Bose was also celebrated today in various parts of Goalpara district, remembering his contributions towards the...