IMPHAL, Apr 3: Condolences continued to pour in from different quarters over the death of senior journalist Khelen Thokchom of Manipur.

On Tuesday, the All Manipur Women’s Development Forum in a statement deeply condoled the demise of Khelen Thokchom, one of the highly respected journalists of North East. He passed away at the age of 58 on Sunday morning following a cardiac arrest.

Khelen was serving as the Special Correspondent of The Telegraph. The veteran journalist was also founder Editor of Imphal-based local daily The Sangai Express. He was born on February 1, 1961 at Tera Tongbram Leikai, Imphal.

His career in journalism began at the Manipur News which he joined in 1985. He later joined several other local dailies before working for The Telegraph newspaper from July 1, 2003 until his death. 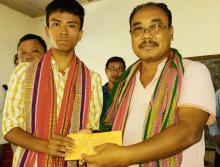 16 Jul 2017 - 9:53am | Shajid Khan
Education is the key to social,moral and cultural upliftment of the mankind. Without formal education nothing can be achieved. This was the observation by Hemanta Rabha, Associate Professor of Dept....