Led by Akhil Gogoi, local residents of all walks of life  spilled to the National Highway No 37 in the evening where the protesters vowed to abort the Centre’s move to impose Bangladeshi nationals in the state which already started witnessing a disturbed demography.

They further said they wont remain idle if Delhi and Dispur remain firm on the move. “ We will fight till the last drop of blood. But we won't allow it to happen. The  government will have to face the consequences,” said Kushal Dutta, a local resident who joined the protest.

The torch rally was taken out hours after KMSS firebrand Akhil Gogoi, who was born and brought up here, addressed a massive gathering in the township on Sunday 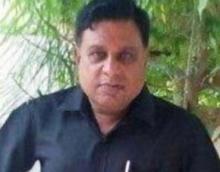 24 Aug 2016 - 10:29am | AT News
Journalists’ Forum Assam (JFA) strongly condemns the murder of a senior journalist based in Junagadh of Gujarat and asked the authority to nab the perpetrators and deliver justice to the victim...