How NRC objections drastically went up in 3 days

AASU along with many other organizations have submitted over 2.5 lakh objections before the NRC authorities in different parts of the state from Saturday to Monday.

According to sources, these objections, mostly, were submitted in Kamrup, Goalpara, Nagaon, Barpeta and Morigaon districts.

Nine lakh applicants who were dropped from the draft in June last year did not turn up with supporting documents while 31 lakh submitted claims. The phase to submit claims and objections ended on December 31 and process to take up the claims is said to have started. 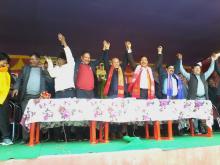 22 Mar 2014 - 9:44pm | AT News
Two dreaded rhino poachers were killed at a fierce gun battle with forest guards in Kaziranga on Saturday.The encounter took place at around 6 in the evening at Aarimora forest camp in Kohora range....

27 Apr 2014 - 11:53am | Jayanta Kumar Das
The peaceful conduct of the recent LS poll in Udalguri district under Mangaldai HPC has been appreciated by all. The district has been infested heavily with violence,extortion etc and there had been...
Follow @Assam Times