Kokrajhar; Flood waters submerged at various villages,residential areas in Kokrajhar town and its adjoining due to heavy rain fall and river waters wave flowing high along the Gaurang rivers, Sankosh, Saralbhanga Rivers in Kokrajhar district.Jawans from SDRF and local police are busy in rescue operation to rescue the flood affected peoples.

Flood waters covered up all roads like JD Road,RNB Road,Vivekananda Path in Kokrajhar town. Several residential areas and business institutes are filled with waters including Basic Training Centre(BTC), Thanapara, Santinagar in Kokrajhar town. The waters of the Gaurang River,Saralbhanga,Keleng,Gongia,Sangkosh rivers are flowing above the danger level. The rain waters flooded at several villages including Kanthalguri,Shukanjhora,Ghoskata,Soamoipara,Medhipara,Mahajanpara. 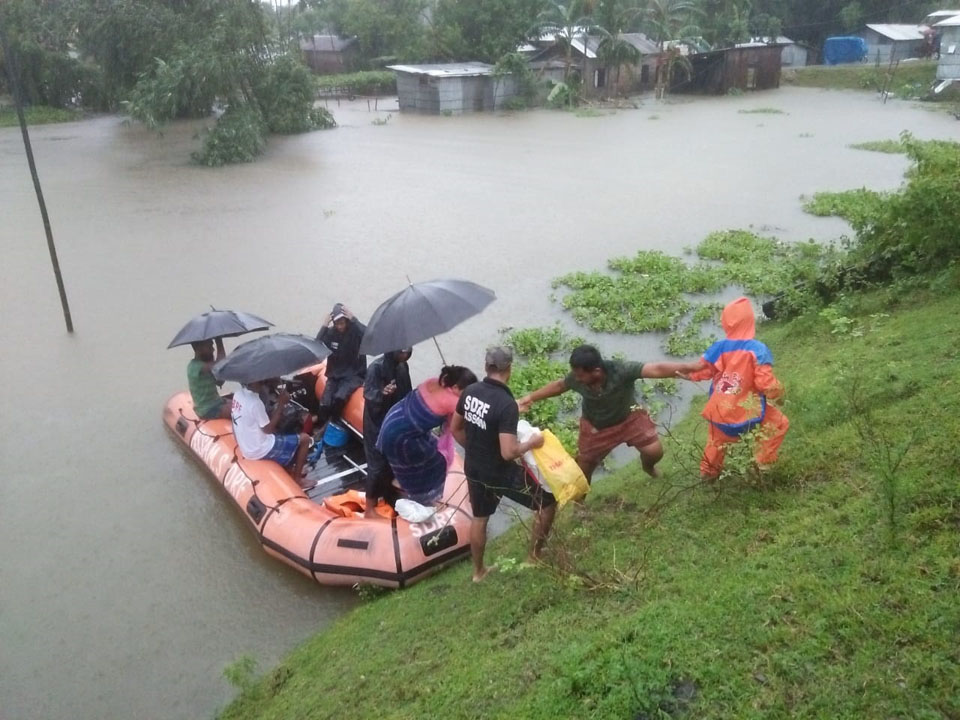 SDRF jawans are strongly involved with rescue operation at Kokrajhar Baghichagaon as many peoples were stranded at their houses due heavy flood. The SDRF jawans reached the spot in the morning and started their rescue jobs and rescued peoples, domestic animals and properties. District administration, Kokrajhar and disaster management authorities are working hard to make necessary rescue the flood affected peoples. A NDRF team from Guwhati is arrived in Kokrajhar to make rescue operation in the region. 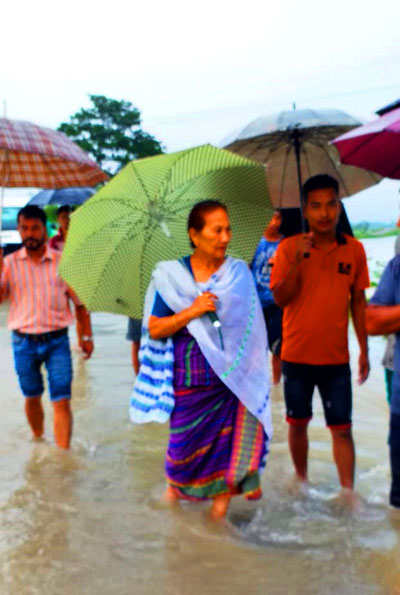 Deputy Commissioner,Kokrajhar Partha Pratim Mazumdar told that district administration is fully ready to tackle flood situation and rescue operations are continue at the flood affected areas.He said that several relief camps are to be set up in the flood affected areas and necessary measures are initiated to the affected region. He said that a NDRF team is reached in Kokrajhar for flood affected reason.He informed all officials from district administration and disaster managements are involved to take stock about flood affected situation.He told that several relief camps have been opened at various places.

She took stock about flood affected peoples and assured for necessary initiatives from the state government to the flood affected situation.She said that the flood washed away several villages and eroded road communication.

2 Aug 2012 - 3:16am | editor
Security forces apprehended four ULFA linkmen, including a woman in connection with the Goalpara IED blast where an army jawan was killed and six others injured on Tuesday.The police arrested a...

Infighting in AGP: Boro vs. Kalita

2 Jul 2007 - 6:24am | editor
Our Guwahati Correspondent: All is not well with the Asom Gana Parishad (AGP) as it is mired in yet another internal bickering.Former AASU leader and the sitting AGP spokesman Prabin Boro is up in...