KOKRAJHAR: A five year old minor male boy was found at Kokrajhar railway station in Kokrajhar.The boy was today produced before the  child welfare committee(CWC) Kokrajhar and has sent to child destination home at Anthaigwlao Chandrapara in Kokrajhar.

Kokrajhar RPF found the boy on 23rd July alone at railway station.Having found the boy,RPF intimate to the childline and childline brought at their destination home. Childline members today produced before the CWC and later handed over the boy to the destination home at Anthaigwlao Chandrapara for fifteen days.The boy has no any detail address or communication to make contact for sending back at his own house.

The boy has suspected that He was abandoned by his parent or left out at railway station while coming in Kokrajhar.The boy who himself identified that his name was Mofidul,but could not say more information about his whereabouts.

The CWC informed that the boy would be kept at destination home for fifteen day under strict care.

8 Sep 2012 - 4:35am | editor
Thousands of people took to the streets in Sivasagar, Jorhat and Dibrugarh districts on an all out war against Bangladeshi immigrants on Friday. Over 30 local organizations in Moran, Amguri and... 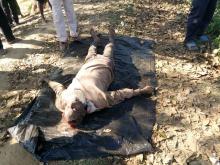 3 Aug 2015 - 7:11am | AT New Delhi
Trans-border crimes along the Indo-Bangladesh border are set to dominate the BSF-BGB bilateral talks in New Delhi beginning on Monday.Sources told Assam Times that both sides are waiting to sign a...