New political party in the offing in BTAD

Sarania disclosed this in front of media on Tuesday.

Gogoi claims all round development

27 May 2012 - 1:00pm | editor
Chief Minister Tarun Gogoi said Assam has developed on all fronts. In his address at the anniversary function at Sarusajai function on Saturday, Gogoi said that the state now ranks in third position... 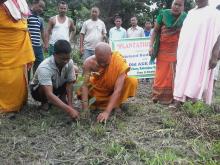 12 Jul 2016 - 7:20pm | AT Kokrajhar Bureau
A plantation drive was carried out on Tuesday at Bodoland Buddhist Park along Gaurang River bank involving villager and social activists. BTC Secretary Rahila Brahma kick off to start the plantation...