Guwahati: Responding to the corona visus scare with a slew of transmission control measures, the Assam government on Sunday announced closure till March 29 of all educational institutions, movie halls, gyms and swimming pools. This is in addition to suspension of all official public programmes and ban on prayer meets, bhaonas etc., announced earlier.

Pointing out that no COVID-19 case has been detected in the State till date, Chief Secretary Kumar Sanjay Krishna at a press meet in Dispur said that the measures are being taken on precautionary ground. He further urged the people to take all preventive care and not to panic. Earlier on Saturday, Chief Minister Sarbananda Sonowal reviewed the situation in the wake of the fallout in India of the corona virus pandemic, with special focus on measures deployed at the State’s airports to screen passengers. Held at Assam Administrative Staff College, the meeting took stock of the health situation in the State with the Chief Minister asking Principal Secretary of Health and Family Welfare department Samir Sinha to keep the health machinery prepared to deal with any contingency. Stressing on the need for utmost care and precaution to keep the State free from novel corona virus infection, Sonowal said that the health manpower must be adequately sensitised while mass awareness be created to encourage people to adopt personal hygiene. He also asked the officials concerned to keep utilisation certificates ready for dispatch to the Centre.

As on Sunday, the number of COVID-19 cases across India rose to 107 with two deaths reported so far, one in Karnataka and the other in Delhi. Maharashtra has been the worst hit State, with several cases reported in Kerala, Haryana, Uttar Pradesh and Delhi among others. Earlier on Saturday, India declared COVID-19 a 'notified disaster' so as to free up public funds and assistance to combat the outbreak. Worldwide, the deadly corona virus has spread to 156 countries and territories with over 1,60,000 people infected and the death toll zooming past 6,000. Prime Minister Narendra Modi on Sunday proposed the creation of an emergency fund for SAARC region to combat corona virus spread in the South Asian region. 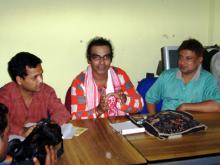 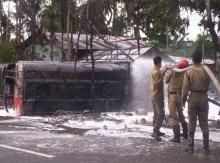 31 May 2011 - 1:16pm | AT News
Atleast 5 people died and over 35 others have been injured at a huge inferno which took place after an oil tanker met mishap on the National Highway 37 in Golaghat. The tragic incident took place at...

18 Mar 2008 - 5:36am | Ranjan K Baruah
The 40th annual conference of All Bodo Students Union has been concluded at Boko on 16th March. The annual programme was participated by its members from different parts of the country. ABSU was...