Guwahati: In a welcome change from previous years, the elections to Rajya Sabha from Assam this time did not throw up any last minute surprises or controversy with all three candidates on Wednesday declared elected unopposed.

Earlier, nomination papers filed by Kalita, Daimary and Bhuyan were found valid in the scrutiny. Elections for the three RS seats were scheduled for 26 March.

Kalita and Daimary thus make their return to the Upper House of Parliament. Seasoned journalist and rights activist Bhuyan praised both Congress and AIUDF leaders for reposing faith upon him.

14 Feb 2018 - 11:38am | Akshaya Pranab Kalita
Namrup: Toklimara, a tiny hamlet in Charaideo district has reasons to heave a sigh of relief. The villagers have no word to say how they feel it after army’s Dao division organized a free medical... 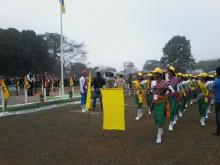 11 Jun 2010 - 3:52am | DigantaTalukdar
The result of the Tiwa Autonomous Council election held in 11 constituencies in Nagaon district on June 7 was declared today. Though the counting held under tight security, a minor dispute arose...