Guwahati: Normal life renmained totally disrupted under the impact of the Prime Minister 's public curfew call across the nation on Sunday to counter the spread of COVID19 virus that took the lives of 5 in 3 states so far.

Streets worse a desert look as all shops and markets along with industrial unites have down shutters from 7 in the morning till 9 at night.

Vehicles are off from the roads under the impact of the call to fight the menace which has yet not reached the north eastern state.

People, mostly,  are keeping themselves confined to their homes to disallow the dreaded virus to spread.

People in the rural areas are also equally keeping inside their houses while some others are setting reverted before the television sets to get to know the happenings across the globe where the killer virus has killed over 15,000 people.

People in the rural areas are also confining to their homes while some others are taking a glimpse of the landscape from their rooftops.

"I support the PM's call. But this is not enough. Millions of people are falling short of sanitizers,  soaps and tissue papers.  The poor people can't afford these to buy.  Musks are beyond the reach of the poor people who are running the risk and as such the lock down can't help in toto," said a village youth in Raha area in Central Assam district of Nagaon.

Another local denizen of Guwahati said, "awareness is there but the state seems to be I'll prepared to deal with the menace.  Many people in the capital city are still roaming without musk and hand sanitizers.  Check up or screening system is limited in the railway stations. Firstly, the government needs to ensure availability of these before allowing the situation to go worse."

A senior doctor who refused to be named criticised the government for failing to be well prepared to counter the menace.  He said on Saturday JMCH lab confirmed a positive case which was negated by a regional lab in Dibrugarh which suggests I'll our preparedness."

22 Aug 2010 - 5:17pm | editor
A rickshow puller and a minor boy were injured during an encounter between security forces and ULFA in the outskirt of Guwahati on Sunday. The encounter took at Hospital Chowk in Sualkuchi at... 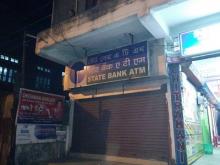 10 Dec 2016 - 12:05pm | AT Kokrajhar Bureau
Bank customer,citizens as well students expresses resented over ATMs poor services in Kokrajhar, heart of BTAD administration since demonetization initiative was started across the country. Most of...