Guwahati: The All India United Democratic Front has stood by Aminul Islam after a lower court in Nagaon jailed the party from Dhing on Tuesday.

Talking to media state party president Champak Kalita said that the party will challenge Islam's judicial custody in the appropriate court of law.

Kalita said that Islam had done no wrong and only what he said was his only apprehension and that he was arrested only because of an opposition party MLA who has been critical of the government for it's many anti people policies.

Islam was arrested after interrogation by police charging him with spreading rumour on the quarantine of some people apprehending COVID19 infection.

25 Jun 2015 - 10:40am | AT News
The All Assam Students' Union will move the Supreme Court alleging Dispur’s move to include all electorates in the National Register of Citizens (NRC).AASU leaders told Assam Times that... 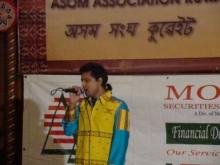 14 Oct 2015 - 8:39am | AT News
Stunned by the reports of starvation-like death in the Bhuban Valley tea garden, the Cachar district administration started reaching out the workers who have alleged non receipt of rations for the...