Lived at Jorhat with his extended family, Pranjal (45) was suffering from serious liver ailments for some time. He was hospitalized last night with major complications.

Pranjal left behind his parent, wife with a son, other relatives and a host of well-wishers.

“Pranjal left all of us at a time when the human race on planet Earth is fighting against the deadly novel corona virus under full or semi lockdown,” said a press release issued by JFA president Rupam Barua and secretary Nava Thakuria adding, “Goodbye Pranjal, may your soul rest in peace !” 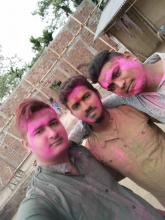 Barpeta steals the march in holi

2 Mar 2018 - 11:28am | AT News
Bijoy kumar Buragohain GUWAHATI: Assam continues to soak in the joy of Holi for the second day on Friday to mark the advent of spring where Barpeta steals the march. The abode of the site of neo...

21 Jan 2014 - 3:52pm | AT News
Major insurgent outfits operating in Assam have called for general strike on the Republic Day.In a joint statement issued to media on Tuesday, ULFA(I), NDFB((S), KLO along with other their...