The Bodoland People's Front(BPF) party flag with the symbol of plow have become a symbol of protest and unity for BPF party workers and supporters across the Bodoland Territorial Area District(BTAD)  who have vehemently opposed the Governors rule in the Bodo belt.

The party workers in an innovative way to register their  protest of Governor's rule on Wednesday flowed a massive 16 × 10 feet BPF flag with the help of hundreds of hydrogen filled baloons at Kokrajhar town in Kokrajhar district of Lower Assam.

A party worker,Mananjoy Daimari said, " This flag flying event is not a moment of celebration but it is the protest and anger of the BPF workers against the Governor's rule as we think the Honourable Governor will not be able to run the council by being physically far away."

He also lamented that though Governor assumed himself to the council on April 27 he have not been able to pay a personnel visit to Kokrajhar the headquarters of BTC to take stock of the administration and other organs.

“The BPF flag with the symbol of plough is a sign of peace,prosperity and development " said Ranjit Deka a BPF worker of Udalguri.

Governor Jagdish Mukhi on April 27 “took over the administration” of the Bodoland Territorial Council (BTC), that administers the BTAD districts of Kokrajhar ,Chirang, Baksa and Udalguri.

Mukhi also appointed Rajesh Prasad and Siddhartha Singh as administrator and principal secretary to the council. The governor is the constitutional head of the BTC, which falls under the Sixth Schedule of the Constitution.

Mohilary had been the chief executive member of the BTC since its creation in 2003, until its dissolution.

The elections to the council, scheduled on April 4, were deferred because of the novel coronavirus pandemic and guidelines for maintaining social distancing. 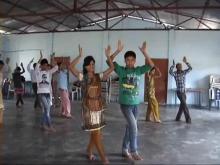 22 Dec 2012 - 2:54pm | Daya Nath Singh
The Congress Party general secretary, Rahul Gandhi, projected by his party as the future prime minister of the country, has proved to be failure for the post due to his shyness and escaping from...

Dibang dam in morass of controversy

14 Oct 2014 - 3:00pm | AT News
The brouahaha over the mega dam at Gurukamukh refuses to die down. Yet another hydel project in Arunachal Pradesh takes the centre-stage of growing controversy. This time the epicenter is none but...