Guwahati: As many as 200 families in a few tiny hamlets in Sonapur area in the outskirt of Guwahati heaved no less sigh of relief as they came to receive some amount of essential commodities at their door steps.  Country North Eastern Regional Agricultural Marketing Corporation Limited (NERAMAC).

The central government undertaking and a local nongovernmental organization LIVE LIFE WITH A CAUSE operating in the area reached out to the lock-down hit area with relief materials much to their respite recently.

"Yes, you can call it a yeoman service.  But the  entire modest attempt is the result of the initiative by NERAMAC managing director Manoj Kumar Das," said Dr Bhupen Kaman, a local organizer of the event.

He said, "this is his new stint in NERAMAC where he is sparing no pain to reach out to the people in this trying time. This was what more or less of what many local residents told us. "

"We know these are too inadequate to feed them.  But this is our attempt from our part and we are with these people in this unprecedented period of lock down to ward off a killer virus COVID19 that killed over 2000 people across the country" said Dr Kaman.

On receipt of the materials,  the beneficiaries thanked NERAMAC MD for his yeoman service and hoped that his leadership would be an eye opener for many budding entrepreneurs in the entire region.

Under the aegis of Ministry for Development of #NorthEastern Region(#DoNER),#NERAMAC continuously coming to the aid of needy with food material and face masks,in association with “LIVE LIFE WITH A CAUSE”.
Kudos NERAMAC MD,Er Manoj Das for these sustained efforts amid #Covid_19 . pic.twitter.com/iBCG4UU4Nx 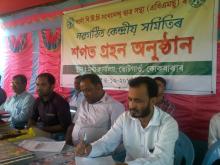 5 Oct 2015 - 8:39am | Hantigiri Narzary
The new committee of the All BTAD Minority Students Union (ABMSU), which was formed recently in its annual session in Udalguri, took oath of office on Sunday  at a programme held Kashipara...

18 May 2013 - 11:02am | Ritupallab Saikia
In the HSLC examination results declared Friday Pronami Kaushik of Golaghat Jatiya Vidyala has brought glory to the district by securing 7th position. She is the daughter of Ashok Borthakur and...