The Assam state election commission announced  the date and scheduled for the by-election for No.22 Koklabari constituency in Bodoland Territorial Region on 8th June.

Addressing a press conference on Thursday, Assam's state election commissioner, Alok Kumar issued the notification for conduct the bye poll for Koklabari constituency in Baksa district with effect from Thursday. The last date of nomination is fixed on 23rd May, and scrutiny is on 24th May. The election will take place on June 8th and counting will be held on June 12th.

17 May 2016 - 8:35am | Shajid Khan
In view of the security for the ensuing declaration of Assembly election results on May 19 and growing road accidents , the Udalguri district administration has felt the need organise the traffic... 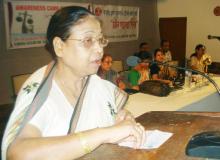 28 Mar 2011 - 11:46pm | editor
With a view to create mass awareness on Legal Aid provided for the common people by Gram Vikas Parishad in association with Lioness Club of Nagaon Greater organized a awareness camp on March 26 at...