People of Assam, particularly those living on the northern bank of Brahmaputra have nearly been ready to observe the historic total solar eclipse of July 22. The count down has already begun in the state to witness the breathtaking celestial beauty of the century. According to Guwahati Plenetarium and Pragjyotish Amateur Astronomers’ Association the total solar eclipse of July 22 would be of longest duration next to one which had occurred in 1054 AD in Assam. Guwahati Planetarium and Pragjyotish Amateur Astronomers’ Association supported by department of science and technology of Assam have already taken up various programmes in the state to create awareness among people particularly among students and teachers for safe watching of the historic event.A number such awareness camps and workshops have already been arranged in different places of the state.Solar filters and brochures too had been distributed free.

Gaonburhas of Kalaigaon, headed by Karun Chandra Deka, President Gaonburha Association, have come out to join the mission of creating awareness among the village people. An workshop cum awareness camp was arranged at Kalaigaon Revenue Circle office on July 2 at 11 am, where Gaonburhas from more than 18 villages attended. DN Hazarika,Circle Officer of both Kalaigaon and Harisinga Revenue Circle inaugurated the workshop cum awareness camp at 11 am. Inaugurating the workshop he said that, Gaonburhas could take the responsibility of creating awareness on any important matter relating public welfare. He thanked the Gaonburhas of Kalaigaon Revenue Circle for their good efforts which had helped decreasing the killing of wild animals and birds in the area.He appealed the Gaonburhas to take the responsibility of creating awareness among village people on removing solar and lunar eclipse related blind believes and superstitions from the mind. Guwahati planetarium trained master resource person on eclipse, Jayanta Das, attending the workshop explained all about the solar and lunar eclipses. According to him people with necessary precautions, must come out to observe the historic total solar eclipse July 22 July which he said would occur again only after nearly 900 years later .He advised people not to look strait with naked eyes at the eclipse before and after totality period which would vary from two to three minutes. But, he said during totality period, people could watch the eclipse without any devices. He explained about the easy making of solar filters at home with easily available materials.

17 Jul 2017 - 12:48am | AT News
A simmering internal feud triggered a shoot out at a religious function in Guwahati where one person died on Sunday. The sensational shoot out took place in the bread day light at a Shikh... 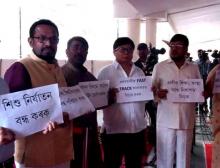 Cong stages walk out in assembly

26 Mar 2018 - 11:20am | AT News
GUWAHATI: The gangrape and murder incident in Batadrawa has triggered no less uproar on the floor of the Assam Assembly on Monday where the main Opposition Congress staged walk out. As the House...

24 Nov 2013 - 5:06pm | Shankar Barua
The Brahmaputra Riverboats Design Challenge (TBRDC) for 2014 is being announced. The competition is to design for a 1-2 person manually operated boat suitable for local fisherfolk. The event is going...