Congress government in Assam has realised the big mistake of patronising Hagrama Mahilari led BPF government in BTAD areas for which they had to sacrifice a lot during last five years in so many cases.But time has come for congress to realise the mistake and the black mail policies of Hagrama would no longer bring miracles. So said former MP and BPPF leader UG Brahma at a crowded election rally at Kalaigaon under 35 Mudoibari constituency,in support of BPPF candidate Madhu Ram Mushahari on April 3. He also said that Hagrama would not enjoy congress patronage in all the matters like previous days. Surprisingly in an appreciative tone he remarked that congress would not allow any kind of election violence including rigging or booth capturing in the ensuing BTC polls.Condemning the incidence of destruction of election offices by suspected BPF supporters he declared that free and fare conduct of BTC election would throw Hagrama out of power for good.Citing examples of massive corruption practices by BPF MLS',MCLA's,EM's,and VCDC presidents he wondered how could once poor people could become millionaires overnight. He thanked Udalguri district BJP headed by its president Niranjan Singh for their open support to BPPF in Udalguri district.Latter talking to media persons Niranjan Singh said that there had not been any election understanding between BJP and AGP for the BTC polls and district committees would take own decision to support somebody.The rally was presided over by former MLA of Kalaigaon Nathu Ram Baro

8 Sep 2014 - 10:10am | AT News
The Karimganj girls suicide case takes new turn with the family members lodging murder complaints before police a day after post mortem report suggested neither rape nor murder. The family of one... 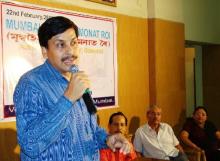