The science based competitions organized at Bholabari High School near Kalaigaon on April 29 and 30 by Aryabhatta Science Centre,Kalaigaon in association with Assam Science Technology & Environment Council Guwahati attracted a large number of crowd. Hoisting of Aryabhatta flag by Padmadhar Bhattacharya, headmaster of Bholabari HS marked the beginning of the two days programme on April 29 at 10 am. where science based extempore speech and science based poster drawing competitions were conducted by Keshab Saharia,asstt. Coordinator of ASC Kalaigaon. Students from 12 schools produced spectacular display of their innovative ideas through colourful posters on various themes like global warming,climate change,pollution, conservation of wild life and nature etc. Science based model competition and exhibition was arranged on April 30, which was inaugurated by Jagadish Sarkar, newly elected MCLA of BTC.On the occasion he thanked Aryabhatta science movement in the state under the supervision of ASTEC Guwahati for the promotion of science and technology in the rural areas.Jayanta Das, coordinator of ASC Kalaigaon welcomed all the guests,teachers,students and people in the early hours of the technical session where several distinguished scientists and science organizers of the state namely Dr. R K.Barman,HOD,Science & Technology and Nayanjyoti Deka,Project Scientists of ASTEC; Dr.Khalilur Rahman former HOD,of Physics department of Mangaldai College and Madhab Sarma ,Principal JNV Kalaigaon were falicitated with gamochas for their contribution in popularising science among people. Dr.R K Barman and Dr.Khalilur Rahman had interesting iteractive session with hundreds of child scientists present answering questions on various topics like -black hole,space station, time zone, GPS,creation of the universe etc.Children as wel as the people were shown spectacular videos including one on Michael Finke's space journey (prepared by Dr.S K Choudhury, Director of ASTEC) where Michael had performed Bihu dance in the space station.The technical session was also addresed by Biren Sarma,president of the receiption committee. Madhab Sarma,Principal,JNV Kalaigaon and president of ASC Kalaigaon presided over the proceeding of the second day where prizes had been awarded to the winners.

31 May 2015 - 1:27pm | AT News
A simmering controversy seems to have marred the pomp and gaiety of the North East Youth Festival in Majuli. Despite the Supreme Court’s ban on the pictures of ministers at the government... 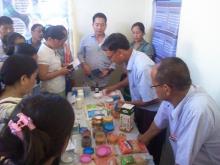