Python rescued by farmers in Udalguri

A python weighing 8 kg was rescued recently on July I by a few cultivators in the village Habibhanga under Kalaigaon Police Station. According to information, one Nur Haque, while harvesting paddy in the field had noticed the python in knee deep water. He along with a few nature loving co-villagers,namely-Hafiz Ali, Mannan Ali, Moktab Ali and Salman Khan had brought the python home unhurt and informed Kalaigaon Press Club. Imran Hussain, president,Kalaigaon Press Club and Jayanta Kumar Das,Advisor of Bodoland Journalists Association immediately visited the place before informing forest officials. The python was latter brought to Kalaigaon Circle Office premise, where Dina Mani Das,Circle Officer,Kalaigaon Revenue Circle formally handed over the python to the forest officials.

Latter, Bankim Sarma, DFO, Dhansiri Forest Division told this correspondent that the python had been released in the Khalingduar Reserve Forest on the same day.Nature loving people have thanked the villagers of Habibhanga village for rescuing the python.It is worth mentioning that due to rapid deforestation activities in the forest areas of Udalguri district have rendered almost all the wild animals homeless therby by forcing them to roam out just to be killed. 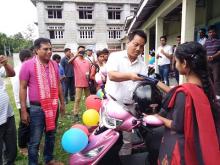 Scooties for girl students in Kokrajhar

30 May 2017 - 6:41pm | AT Kokrajhar Bureau
26 meritorious girl students from BPL families was given away Scooty by Education department of BTC at a programme held at Girls’ College in Kokrajhar on Tuesday. Kampa Borgoyary, BTC deputy chief...

7 Mar 2016 - 12:53pm | AT News
By Sanjb Baruah If I were a Facebook user I would have surely clicked ‘like’ on the news that the Nationalist Socialist Council of Nagalim (Issak-Muivah) and the Government of India have reached a...