Mumbai-based thrash metal band Zealous recently released the live DVD of their tribute to legendary bass guitarist Cliff Burton. The DVD, which was released earlier this month on October 3, is being promoted all over the country, much to the delight of enthusiastic takers. The DVD was recorded in Akash Studio and it was mixed, mastered and engineered by Akash Sawant.

THE DVD was shot at a Cliif Burton tribute gig performed by the band in Mumbai in the last week of September. Released at a function aired live by B-69 Bajao, the tribute to Cliff Burton DVD has been directed and produced by Vicky, frontman of the band Zealous.

Cliff Burton is a name which is much revered in the music fraternity, the metal heads in particular. An American musician, Burton is better known as the bass guitarist of all time great thrash metal band ‘Metallica’. One of the earliest members of the band, Burton was part of Metallica from 1982 and performed in the band’s debut album, Kill ‘em all. He performed on two more Metallica albums, Ride the Lightning and Master of Puppets, both of which met with major commercial and critical success. A master guitarist, Burton was known for his “lead bass” approach, in which the bass played a melodic and soloist role, in addition to holding down the harmonic and rhythmic foundation of the band. He died in an unfortunate bus accident and was posthumously inducted into the Rock and Roll hall of fame with Metallica.

Talking about the DVD, Vicky says, “On 27th Sept, 1986 Cliff Burton died in a tragic bus accident, Being one of his biggest fans, I organized a gig on September 25, 2010 as a tribute to his music and soul, where we played and shared our music with him. We had a very awesome time playing and want to thank all our fans from the bottom of our heart for their love and support.”

Zealous is also planning to release their debut EP shortly, “Within a couple of weeks we will release our debut singles which features 3 tracks. We hope that everything works out, so that we can release our EP in the Christmas time.” There seems to be no stopping this band which recently got featured in Encyclopedia Metallum: The Metal Archives http://www.metal-archives.com/band.php?id=3540315363.

4 Feb 2015 - 3:35pm | AT News
Come Friday. The state’s Water Resources Department is all set to host the Third Assam Water Conference-2015 with a focal theme of ‘Management of Water-Related Disasters – Urban and Rural. The two...

31 Dec 2017 - 4:54pm | Shajid Khan
“The Rabhas are one of the most colourful communities of Assam who are blessed with vibrant culture, heritage and rich tradition. They have enriched the cultural mosaic of the state like many other... 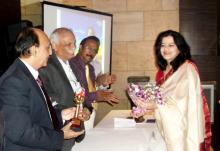