A one-month free coaching classe for 100 nos. of HSLC examinees of Nazira sub division is being started on December 14 at Nazira. This project is intended to help students belong to poor families by voluntary organisation Probaah.

22 Nov 2017 - 6:51pm | AT News
GUWAHATI:Veteran actor Biju Phukan is dead. He was 70. Phukan, the doyen of Assamese film world suddenly died of cardiac arrestin the afternoon. According to information, Phukan, who was not... 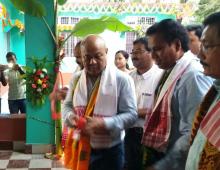 Hagrama hails GST in the country

1 Jul 2017 - 10:03pm | AT Kokrajhar Bureau
BTC chief Hagrama Mohilary extended his best wishes to the launching of GST late night, expresses hopeful that the GST would be gaining economic development in the country. Mohilary ceremonially...

21 Jul 2015 - 2:11pm | AT News
Amid raging controversy of the Victoria suicide case, police arrested a person in Guwahati accusing him of abetting the Meghalaya woman to commit suicide early this month.Identified as Manbha Kumar...