For a change, the voice of the Indian diaspora is now being heard, albeit without the expected, ubiquitous sitar and tabla. Mumbai-born and US-based musician Ameet Kamath recently released his debut album, Greasy Rails, in New York, breaking new grounds in bridging the popular divide of the music of the East and the West.

Talking about his debut offering, Ameet says, “Greasy Rails is about coming to terms with what matters in life. It’s about refusing to take anything less than what you’ve been seeking.” He adds, “In it, I’m telling stories so that the listeners can understand life as I do – constantly negotiating spaces as an immigrant in the 21st century.” The language he chooses to narrate his stories in, however, is pure global rock.

Having been born and grown up in Mumbai, Ameet’s tryst with music began as a member of a school choir. But then came the wave of western pop – in the form of Beatles, ABBA and Queen – which left an impact more far-reaching than anyone ever imagined.

It was this infatuation that brought him to the West. And once there, living in New York and San Francisco, what he grew into and found was a way to give voice to his experience of the modern, young, Indian diaspora—not the stereotype of the immigrant Indian cab driver or doctor—in the musical language he’d come to love. “I wanted to be an Indian vocalist who told his stories through Western pop. How hard is that to imagine? Pretty hard, I guess, from the reactions I used to get when listeners didn’t hear any tabla or sitar. But the musical language is the same, what we have as garba-dandiya music for example is actually just music in 12 8 time signature for example. I've incorporated more rhythms than actual Indian instrumentation, so it's a bit more subtle than overt.”

Ameet went to the US as a “techie” in 1995. But it was only after he moved to New York after a couple of years that he began to immerse himself in jazz and began performing the American songbook whenever and wherever he could — at weddings, street corners, parks, cafes, and bars. His persistence paid off with a jazz-pop residency at the notorious Marion’s Continental on Bowery, where the patrons and fans encouraged him to set his own story to song. Needing to find inspiration for his original material, he set off on a creative quest across the country that landed him in San Francisco. It was there that he conceived Greasy Rails; the ensuing material was written and composed over the next two years.

A musician whose honest storytelling is set to pop-rock music, his first offering is pure global rock that gets up-close and personal. “I didn’t want to be another Indian crossover singer. If my music crosses over anything, it’s from pop to folk-rock.”

Those, for him, are the global, barrier-breaking languages. 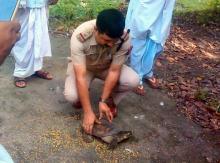 6 Oct 2017 - 10:16pm | Ranjanjyoti Mahanta
A rare species of tortoise has been saved after being found trying to cross over the Dhing-Nagaon connecting road adjacent to Batadrava police station on Thursday night.The approximate...

22 Aug 2008 - 3:52am | editor
The season for exhibitions begins at NEDFi-Haat with the inauguration of the annual week-long “North East Handloom & Handicraft Fair 2008” on August 21. The exhibition was inaugurated by...

3 Nov 2016 - 4:57pm | AT News
A Russian tourist met watery grave in Arunachal Pradesh leaving no less shock and sensation in the entire north eastern region on Thursday. According to information, the incident took place in the...