Guwahati : The 31st National Highway witnessed a loud roar today when the thousands of students march through it to the District headquarter of the Baksa shouting the lawlessness of the state government as Dr. Samujjal Bhattacharjee, Advisor of AASU, Shankar Prasad Roy, President of AASU along with thousands of All Assam Students Union (AASU) activists taken out a protest rally, Satyagraha, in demand of the immediate stern action for the killing of the AASU leader Tapan Das.

Tapan Das was the president of the Champaguri-Koklabari unit of the All Assam Students’ Union, was on his bicycle when the killers waylaid and attacked him with sharp weapons at Golagaon, near Rangajuli under Jala police station the last 5th September. “The state government has totally failed to give protection to the common people,” president Shankar Prasad Ray and general secretary Tapan Kumar Gogoi said in common.

The AASU confirmed its further strong movement for the investigation of the killing of their colleague and the indigenous people of the state as the All Bodo Students Union (ABSU) has also extended their support to it today. 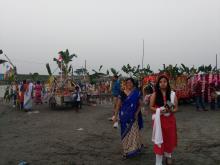 26 Jul 2017 - 8:23pm | AT Kokrajhar Bureau
The Chhath Puja was celebrated in Kokrajhar, heart of BTAD administration along with rest of the state on Thursday evening that worship and prayer to the Sun Devota (Sun God) at Patharghat along...

13 May 2010 - 11:20am | pallavibarua
Nemati ghat in Jorhat. This is one of the three main riverine routes to reach Majuli, the largest river island in Asia. The other two river fronts being Luit-Khabalu ghat from North Lakhimpur and...

1 Apr 2014 - 2:32pm | AT News
Congress is set to lodger complaint against Tezpur BJP candidate Ram Prasad Sarma charging him with striking deal with a banned militant outfit to ensure victory in the upcoming Lok Sabha polls.The...