The results of the assembly election which was held in April.2011 has been declared on May 13 in Assam.Congress has won three seats in Darrang district while its ally BPF won three seats in Udalguri district.The remaining one seat has been won by AGP.In the 126 strong Assam assembly Congress won absolute majority by winning 78 seats alone.Its partner BPF won 12 seats, while AUDF (Muslim party) won 18,AGP won 10 and BJP won 5 seats respectively.

10 Nov 2009 - 5:42am | Dibya J Borthakur
The down-to-dusk Assam bandh called by the banned United Liberation Front of Asom (ULFA) passed of peacefully in Nagaon district. The bandh was called in protest against the arrest of two of its... 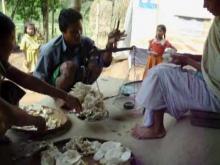 10 Dec 2013 - 12:56pm | Pranjal Baruah
The mushroom industry in Assam initiated in the early 90’s by Assam Science and Technology Environment Council (ASTEC) taking a group of youths to Pradhan in Madhya Pradesh for training on mushroom...