In another cruel human act in Udalguri district, a female leopard was beaten to death in Orangajuli TE on June 8 at 3 pm.The leopard which had by mistake entered human locality called Samosa Line (labour line) when hundreds of villagers equipped with dao and lathi attacked the panicked animal.A boy named Johan Kerkata was injured while attacking the animal.The forest officials arrived at the spot at 4 pm.But the agitated villagers tried to attack them,demanding compensation on the spot.Later the dead leopard was taken to Nonai Range Office for post mortem and cremation.According to forest officials the killed leopard was 30 inch tall and 35 inch long with the 30 inch long tail. Range Officer,Nonai Forest Range Office has already filed an FIR at Paneri police Station (N/FIR/11/532 Dated June 8).

In the meantime,nature loving people of Udalguri district strongly condemned the brutal killing of the female leopard in Orangajuli TE and the electrocution of the wild tusker in Hatigarh TE in just one week in the district.Former Minister and MLA,Udalguri,Rihon Daimari;Santias kunjur,EM,BTC have express sorrow at the killing of the leopard. Daimari also said that he would raise the matter on the floor of assembly. 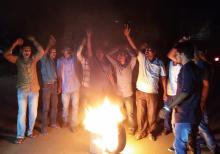 13 Sep 2017 - 10:49pm | AT News
The Dibrugarh police have arrested Akhil Gogoi on Wednesday a day after the RTI activist announced his preparedness to take up arms to safeguard the interest of the people. A team of...

Cong to get 8 seats: Opinion poll

14 Apr 2014 - 9:00pm | AT News
A ray of respite for Congress in Assam. An opinion poll seems to have brought smiles to the party in rank and file amid hectic activities for the ongoing Lok Sabbha polls.According NDTV opinion poll...