Assam's students bodies blame it all on the OIL chairman MR Pasrija for the sealing of its office in New Delhi.

The leaders of the All Assam Students' Union (AASU) here demand proper inquiry into the whole incident and that the report should be made public.

They also demanded to turn the Duliajan administrative office of the company into a full-fledged corporate office.

President of All Moran Students’ Union Birinchi Moran, expressed deep anguish over the incident saying the headquarters of public sector companies such as the OIL and ONGC should be shifted to Assam.

Duliajan regional unit of the AASU says normal functioning of the office has been severely hampered due to the sealing.

In a statement, Anil Gogoi and Mahendra Dutta both president and general secretary urge OIL authorities to ensure that important documents are not lost or damaged as a result of the sealing.

A day after the New Delhi-based corporate office of the Oil India Limited was sealed by Municipal Corporation of Delhi (MCD) officials on Friday, reactions have started pouring in, specially with the AASU flaying the OIL higher-ups, particularly CMD, for the whole incident.

Notably, the OIL, which houses in a rented premises at 5 Sikander Road in New Delhi, was sealed on Friday by the MCD.

This, it may be added, was done in conformity with the Supreme Court ruling in which the apex court had asked the MCD to seal all commercial establishments located in residential areas of the national capital.

Law to take its own course

2 Mar 2014 - 9:36pm | AT News
Finally Chief minister Tarun Gogoi broke his silence on the arrest of Akhil Gogoi and five of his associates.Talking to reporters in Dibrugarh on Sunday, Gogoi said that the KMSS president violated... 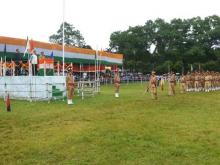 15 Aug 2015 - 8:50pm | Hantigiri Narzary
The 69th Independence Day was celebrated with great fanfare at District Parade Ground of Kajalgaon in Chirang district along with rest of the country. In the programme, the BTC Deputy Chief Kampa...

17 Oct 2015 - 10:00pm | AT News
The Kamrup(rural) police have arrested three more people on Saturday two days after the along with four others gangraped a woman in Rangiya on Thursday. The trio were arrested after the victim’s...