A mammoth security arrangement is on the cards to make to ensure peace during Durga puja commencing from Thursday.

According to information, top ranked security officials are constantly monitoring the situation in view of possible militant activities during Durga puja.

District administrations across the state are also in constant touch with the puja celebration committees to ensure peaceful celebration of Durga puja.

Our Jorhat Correspondent adds: The police recovered an improvised explosive device Chinamora at 11 in the morning on Sunday.

According to information, the bomb had cells and was a timer device with 18 iron pieces and 200 grams of explosive material.

The bomb was thrown into the compound of the business establishment from outside which was later defused. Police here say the damage would have been extensive.

Top ranked police and civil officials rushed to the spot and started investigations which is going on and no one has so far been rounded up by the police.

2 Sep 2012 - 2:36pm | Anup Biswas
The Executive Committee of the Dima Hasao Autonomous Council (DHAC), expressed its grave concern over the disturbing situation arising out of the forceful and illegal collection of house taxes from...

15 Jan 2008 - 4:30am | editor
Sensation still prevails in Umrangso a day after Black Widow militants killing five people including a girl near the Kopili Hydroelectric project. Police and para-military jawans are patrolling in... 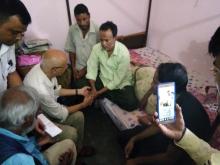