Local correspondent of a television channel of Lakuwa and organising secretary of the Simaluguri Press Guild Bipin Hazarika was attacked by two unidentifyed gunmen on his way home at 9.30 p.m. on September 24. According to information, while Hazarika was on his way home by his motorcycle on Lakuwa-Rajgarh road suddenly two young men came on a blue coloured motorcycle and forced him to stop. They misbehaved and try to shoot with a pistol. Fortunately at the same time an oil tanker came and the miscreants flead away by threatining him to kill within 15 days. Hazarika filled an FIR at Simaluguri police station in this regard and investigation is going on. 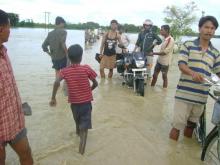 21 Jan 2018 - 6:31pm | AT News
GUWAHATI: RSS is born and brought up purely for social cause and it wants to spread its culture and vision among millions of the people living in this country. This was more or less of what Mohan...

Demand for a super fast train from Dibrugarh to Mumbai

12 Mar 2012 - 7:58pm | Jutika Mahanta
“More than my illness traveling became a major issue”, says Mitrakanta Hazarika who hails from Duliajan adds honestly : “While coming we need to travel by bus till Guwahati for...