In the 7th century AD, when Buddhism was strengthening its hold over North India, a group from the priest class forwarded a new concept to arrest the growth of Buddhism. Gautam Buddha was declared the ninth incarnation or 'avatar' of Lord Vishnu (the Protector God of the Hindu Trinity). That gave a death blow to the expansion of Buddhist faith and ideals in the country of its origin.

As for dams in China, it is the duty of the central government of India to issue strict orders to the Chinese authorities not to meddle with water resources which happens to be the lifeline of these north-east states. If dams are really coming up in the Chinese side of the Brahmaputra, the numerically elected MPs of the greatest democracy in the world should speak up. It's always nice to know that the Indian government is so very concerned about the 'development' of Assam and Arunachal Pradesh (an idea of 'development' which is again imposed and planned by a set of persons with no concern for mass welfare and sustainance of life in tune with nature).

If Tarun Gogoi and the company he works for (that is, the Indian Union Govt) wants the so called 'Maoists Forum' to oppose the big dams in China, that means, the Indian government is helpless and has made the 'Maoists' its spokespersons. 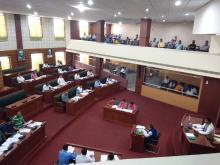 14 Aug 2016 - 10:16pm | AT Kokrajhar Bureau
Kokrajhar is all set to celebrate 70th Independence Day on Monday with befitting programme scheduled at Govt HS & MP school ground in Kokrajhar, heart of BTAD administration for which students...