Seven CRPF jawans were killed in an ambush by DHD miliatnts in Thai Jawari area near village Longting under Umrongsho police station in the North Cachar Hills district, the attack took place around 11 am today.

One of the CRPF vehicles first ran over a powerful landmine. Soon after the explosion, militants hiding atop a hill fired indiscriminately on the convoy.The CRPF jawans were escorting a commander of CRPF's 50 battalion from Dimora camp. The commander escaped unhurt.

The rebels also looted a huge number of arms and ammunition from the CRPF jawans.

7 Sep 2017 - 3:07pm | Abani Baruah
They say the World War ii produced more waiters than soldiers. Similarly insurgency has produced more Northeast experts than insurgents. If we exclude the Telangana movement which was based on class... 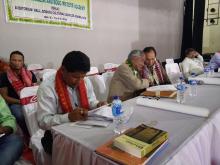 19 Mar 2018 - 7:03pm | AT News
Kokrajhar: An all India multi-lingual poet's meet evoked encouraging response as it took place at Bodofa Cultural Complex in Kokrajhar on Monday     At-least 24 noted poets across...

Himanta: now its turn for Mahanta

15 Jul 2010 - 11:38am | editor
After Akhil Gogoi, now its turn for Prafulla Kumar Mahanta to take on Himanta Biswa Sarma. Addressing a press conference in Guwahati on Wednesday, the former Chief Minister said never did he met the...