The State Election Commission (SEC) is gearing up for holding a free and fair panchayat polls in the state as the Gauhati High Court has cleared the decks.

According to information, the poll notification will be issued on November 29 and the model code of conduct will come into force.

The authority has already issued strict instructions to the district administrations for necessary arrangement to make the polls a free and fair.

The state poll panel will hold the election in three phases and the results are expected before January 15. But sources here say the voters will have to go with ballot papers instead of electronic voting machines (EVMs) in the polls. 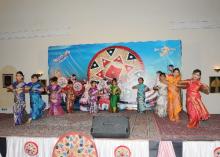 29 Apr 2009 - 1:45am | editor
The Assamese community in Muscat has grown day by day and at present more than 35 families are living in Oman. The community has been celebrating the Rongali Bihu since long time and this year it was...
Follow @Assam Times