Weather is fine and so also tourists from the state and even from France and others foreign counties are rushing to Majuli to attend the Raas festival in the world’s largest river island which gets underway on Saturday.

Amid tight security arrangement, the Jorhat district administration is arranging special ferry services for the people to reach Majuli. The people in the island too are making elaborate arrangement to make the grand festival a success.

Speaking to Assam Times, the central celebration committee officials of the Rass Festival say nine tourists are also arriving to attend the Raas Lila of the Lord Krishna.

Its 167th year for the Dakshinpaat Sattra, which has been observing the Raas festival while the Auniati Xatra’s festival completes 100.

Photo: The Stradhikar of historic Dakhinpat Sattra of Majuli, the hub of Sattriya culture, Nani Gopal Goswami alongwith disciples carrying out "Brindavan Chandra Yatra" on the eve of "Raas Leela" celebrations, the biggest event of the river islanders on 22-11-2007 night. Pix by UB Photos.

7 Oct 2014 - 6:44am | AT News
More people are believed to have fallen ill in Jagiroad after chlorine gas leaked from Hindustan Paper Corporation paper mill in Morigaon district.Ten more people have taken ill with complaint of...

4 Jan 2012 - 3:04am | editor
Security forces on Tuesday arrested an anti-talk NDFB hardcore cadre during a joint operation in Kokrajhar district and seized huge cache of arms ammunition from him. According to sources,... 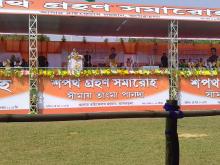